“The Great Escape” by Keith Burns

As night fell on the night of Friday 24 March 1944 preparations began for the culmination of an audacious plan to implement the mass breakout of Allied aircrew from Stalag Luft III, a prisoner-of-war camp some 100 miles south-east of Berlin. Promising to be the largest escape of its kind during World War II, the escape had involved the clandestine digging of three tunnels – Tom, Dick and Harry. In the end only Harry was used.

If all had gone to plan at least 200 prisoners should have escaped but the prisoners soon discovered that Harry had been dug short of the tree line beyond the camp’s perimeter fence; once out of the tunnel the escapees would have to make a stealthy dash to freedom. It slowed proceedings and in the end only 76 men managed to get out before an eagle-eyed sentry raised the alarm – the moment graphically depicted in Keith’s piece.

Sadly, of the 76 who did get away all but three were soon recaptured and in a display of shameful pique 50 of them were summarily executed on Hitler's orders. Just three men evaded capture and made it back to England.

Issued to remember the anniversary of this famous event, each print is personally signed by artist Keith Burns, hand-numbered and issued with a unique Certificate guaranteeing its authenticity.

In recognition of the 76 men who made the daring escape, this memorable edition is restricted to just 76 copies worldwide and personally signed by actor JOHN LEYTON who starred in the classic 1963 film ‘The Great Escape’. John played the role of Willie Dickes ‘The Tunnel King’ who was one of only three characters to successfully make it to freedom. 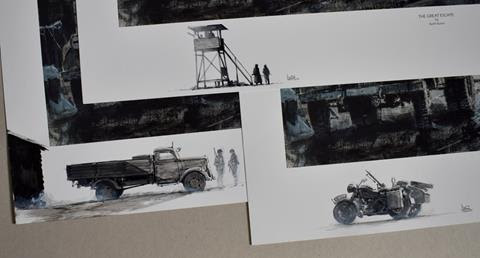 Every copy in the Limited Edition and Collector’s Edition can be upgraded to include an original Remarque or Double Remarque by Keith in the lower margin of the print. These can be completed in either pencil or acrylic to create a completely unique piece and if you have a particular request please ask when placing your order.