“Back From Berlin” by Anthony Saunders and Commemorative Book

The Mighty Eighth Book:  The heroics of the airmen who served in the United States Eighth Air Force and fought in the embattled skies of Europe during World War II are legendary. When in 1942 they commenced their campaign against Nazi Germany, their arrival sent a deep shudder of despair through the German High Command. For the next three years, whilst RAF Bomber Command bombed at night, by day the American Eighth Air Force pounded the enemy war machine to its knees until, by May 1945, victory had finally been won.

This commemorative book provides a unique glimpse into the lives of some of the men and machines that fought in that bitter, often titanic struggle, together with some of the extraordinary missions they flew.  Beautifully illustrated using an unparalleled collection of paintings, drawings and specially created maps and diagrams from the archives of the Military Gallery, this book is not simply a collection of artwork; first and foremost it is a historically accurate recollection of events, painstakingly researched with the assistance of leading historians.

The Book and Print Portfolio comes with Matching Numbered Items: “BACK FROM BERLIN”

Exclusively commissioned for the occasion, Anthony Saunders has portrayed a group of B-17 Flying Fortresses as they make landfall over England following the Eighth Air Force’s first daylight raid to Berlin carried out on 4 March 1944.

Each numbered copy of the book has been signed by the artist and a highly-regarded USAAF veteran who took part in the raid depicted:

The Collector’s Edition includes a total of SIX veteran signatures...

With all the components of the Limited Edition, each book in the Collector’s Edition contains a special bookplate additionally signed by five veterans who flew with the U.S. 8th Air Force during WWII:

With all the components of the Collector’s Edition, each print is transformed by the addition of an original pencil drawn Remarque crafted in the lower margins of the print by artist Anthony Saunders. Each drawing, themed on the 8th Air Force, is unique but in special circumstances can be crafted to personal specifications – but please first enquire at time of order.

Twice the size of its conventional counterpart, Anthony’s Double Remarques are spectacularly eye-catching. Issued in restricted numbers, if previous releases are a guide we expect these double remarques to sell-out early. 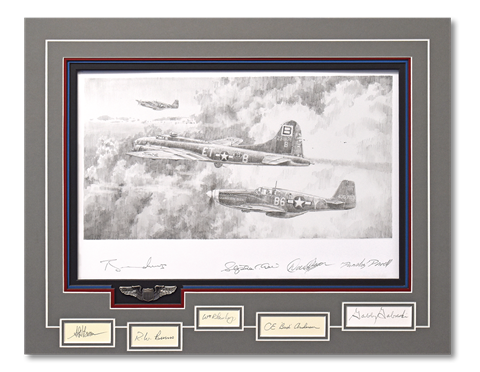 With all the components of the Collector’s Edition, this highly-collectible FOURTEEN signature Tribute Edition is issued with a matching-numbered original pencil drawing by Anthony. Each drawing is personally signed by three highly-regarded Eighth Air Force veterans:

Creating a special collector’s piece to be cherished for future generations, each drawing is then matted to full conservation standards to include a further five autographs of leading airmen who flew with the Mighty Eighth, including the pilot of the lead aircraft on the raid depicted in Anthony’s print Back from Berlin and two leading American fighter Aces:

The Giclée Studio Proofs on canvas...

For anyone preferring a canvas edition of Anthony’s piece Back from Berlin, these stunning Giclée Studio Proofs are also available. Printed directly on to fine-weave artist’s canvas by one of Europe’s leading Giclée printers the results are almost indistinguishable from the original painting in texture, tone and colour.